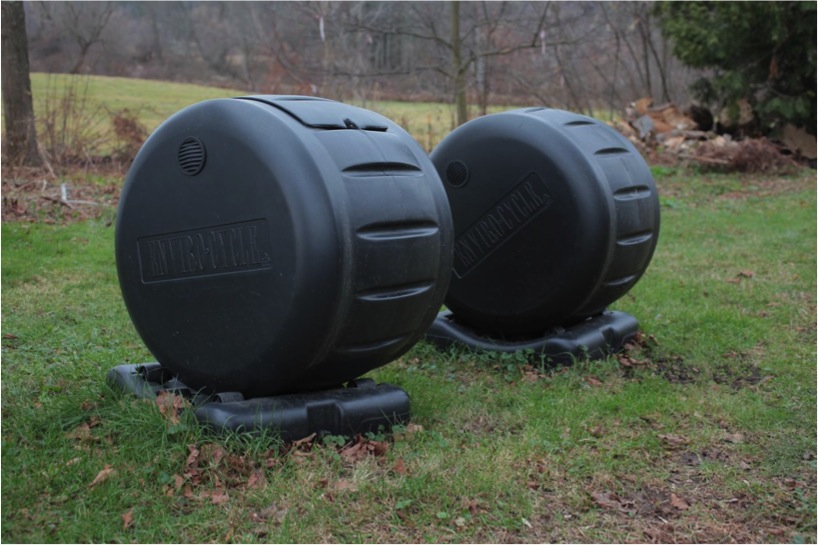 Brown material:  Fallen sugar maple leaves with a few twigs, with the same mass as the Myco Foam in compost bin 1.

Over the course of 1 year, I tumbled the bins to create two compost compositions: 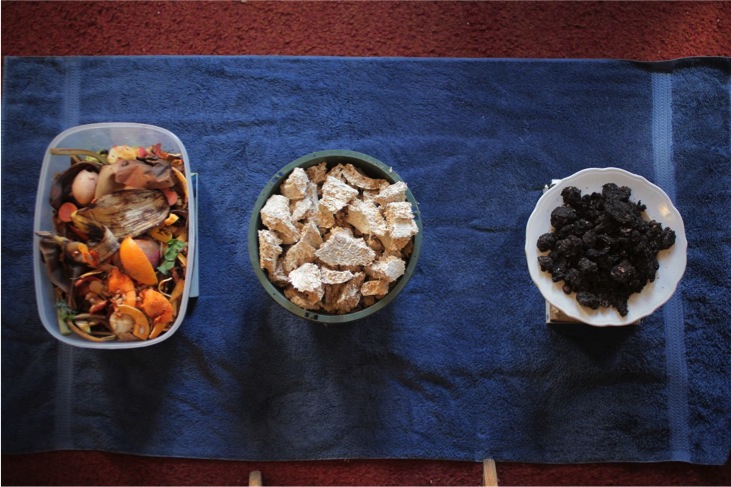 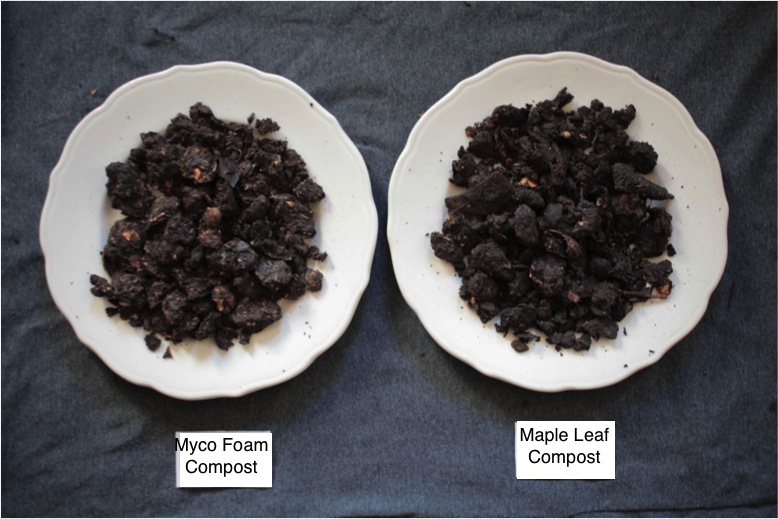 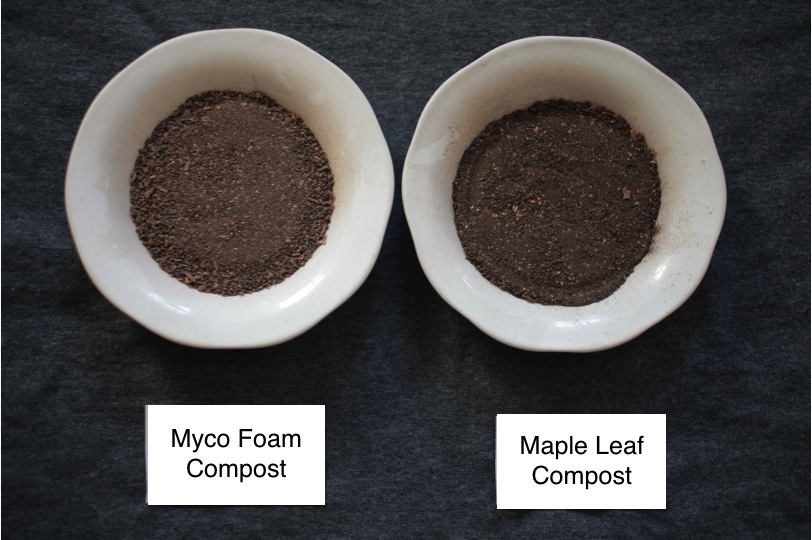 The table below shows chemical analyses done on both types of compost by Cornell University Nutrient Analysis Lab in January of 2014. The purple shaded text and numbers are for macronutrients, or elements needed in relatively large quantities by growing plants.  The Myco Foam compost is comparable to maple leaf compost in these elements, and the only statistically significant difference shows more potassium in the Myco Foam compost.  The remaining numbers show the ratio of carbon to nitrogen in the tissue, and other elements needed in smaller quantities or not needed at all by growing plants.  Two elements needed by plants, iron and zinc, are in higher quantities in the maple leaf compost, but these trace elements are not a concern for plant growth in most cases.  Aluminum is not needed by plants and in fact high aluminum concentrations in soil can be toxic to plants, but neither compost type has excessively high aluminum levels. 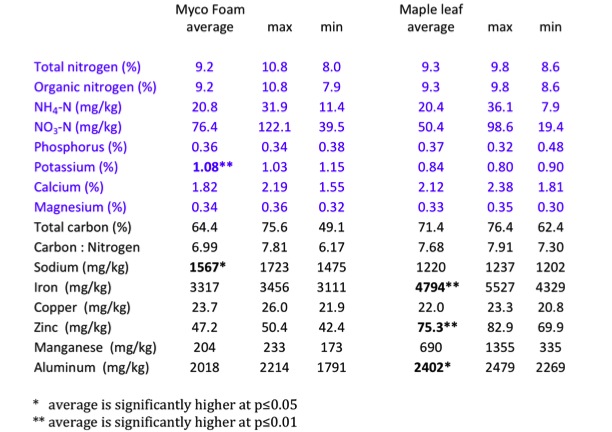 Step 2: Growing carrots in soil made from the 2 types of compost and sand

I started this project in May of 2014 to see how produce would grow in each type of compost I had created earlier in the year. 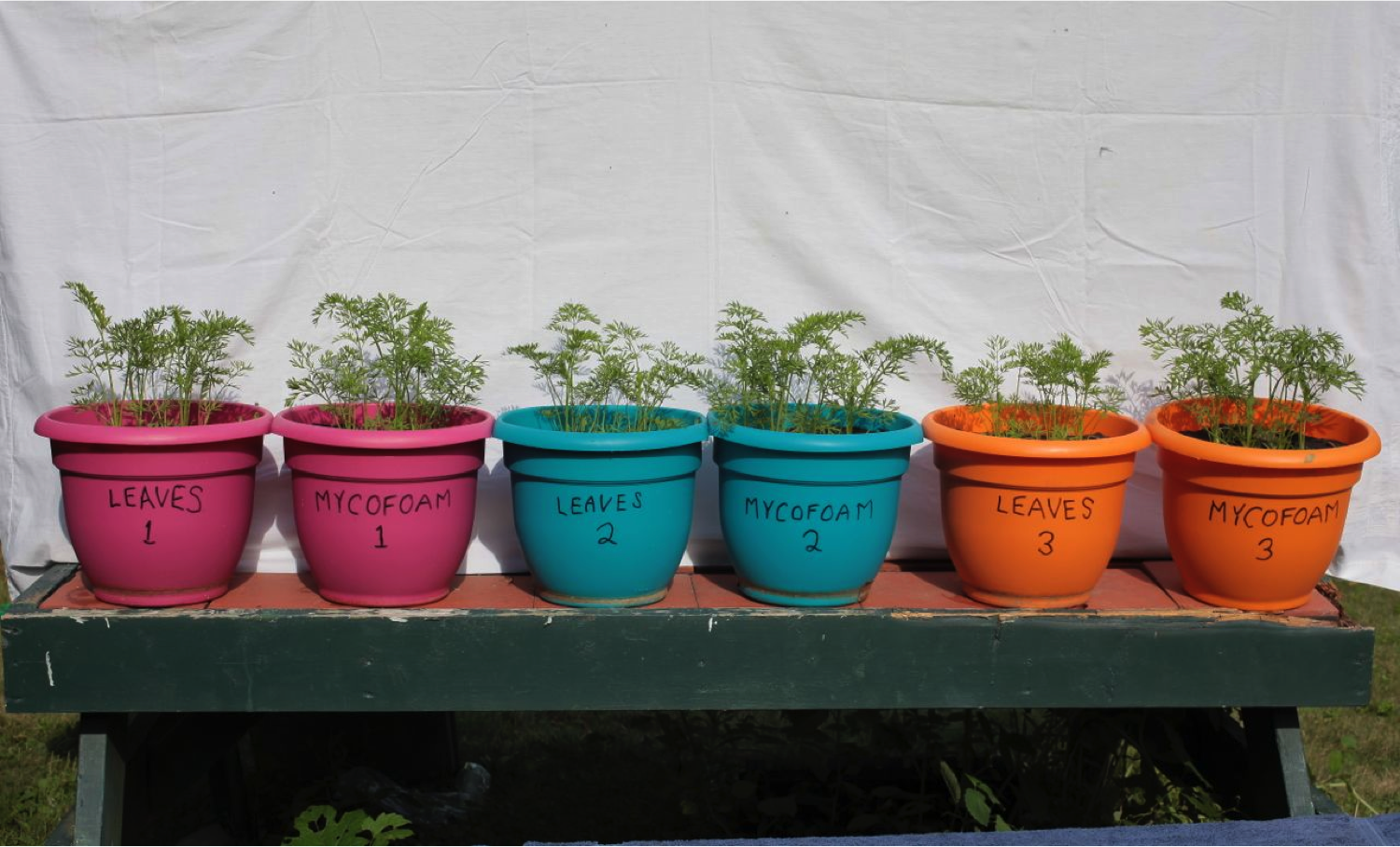 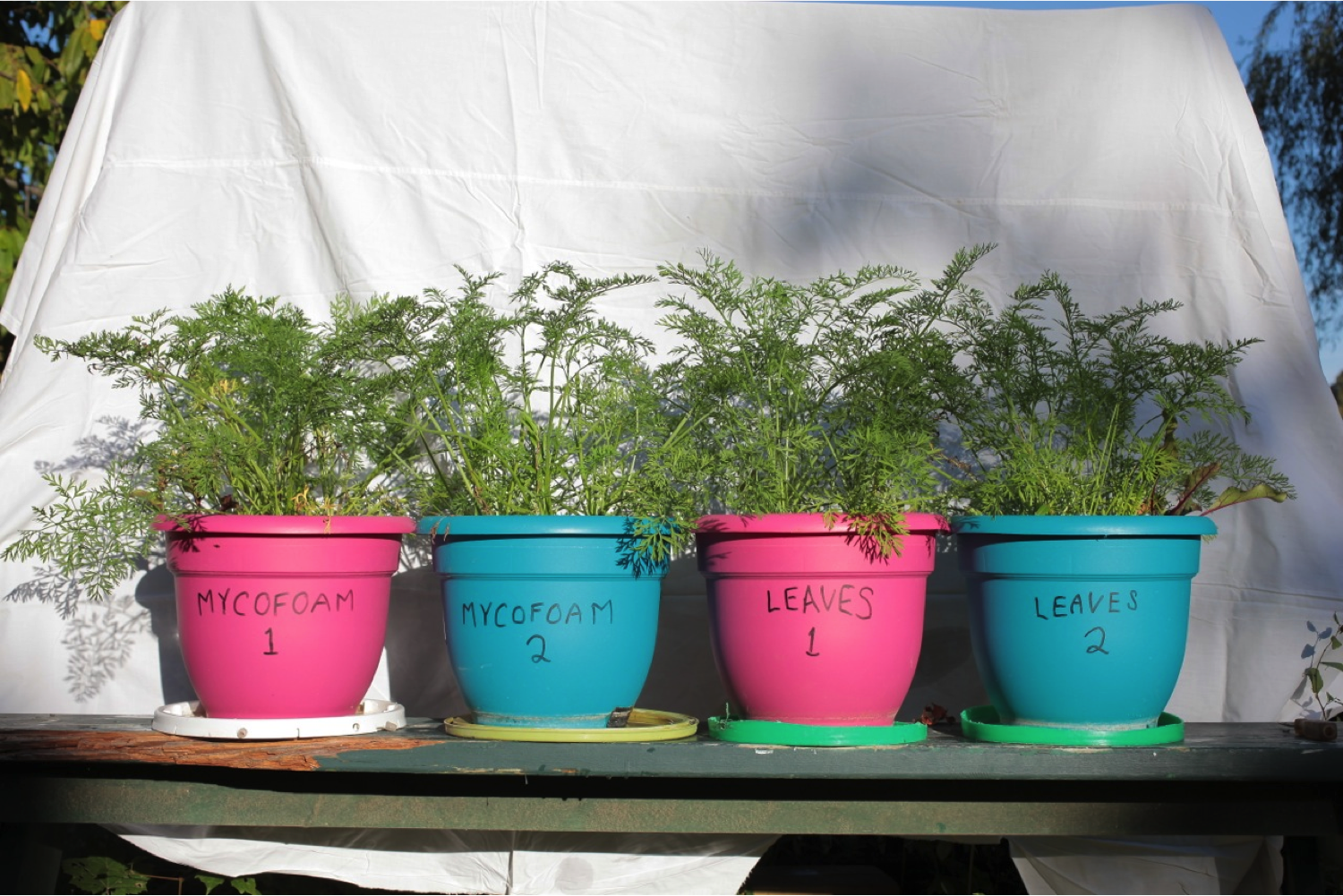 The plants grew quickly and produced many carrots for us to taste test and run analysis on! 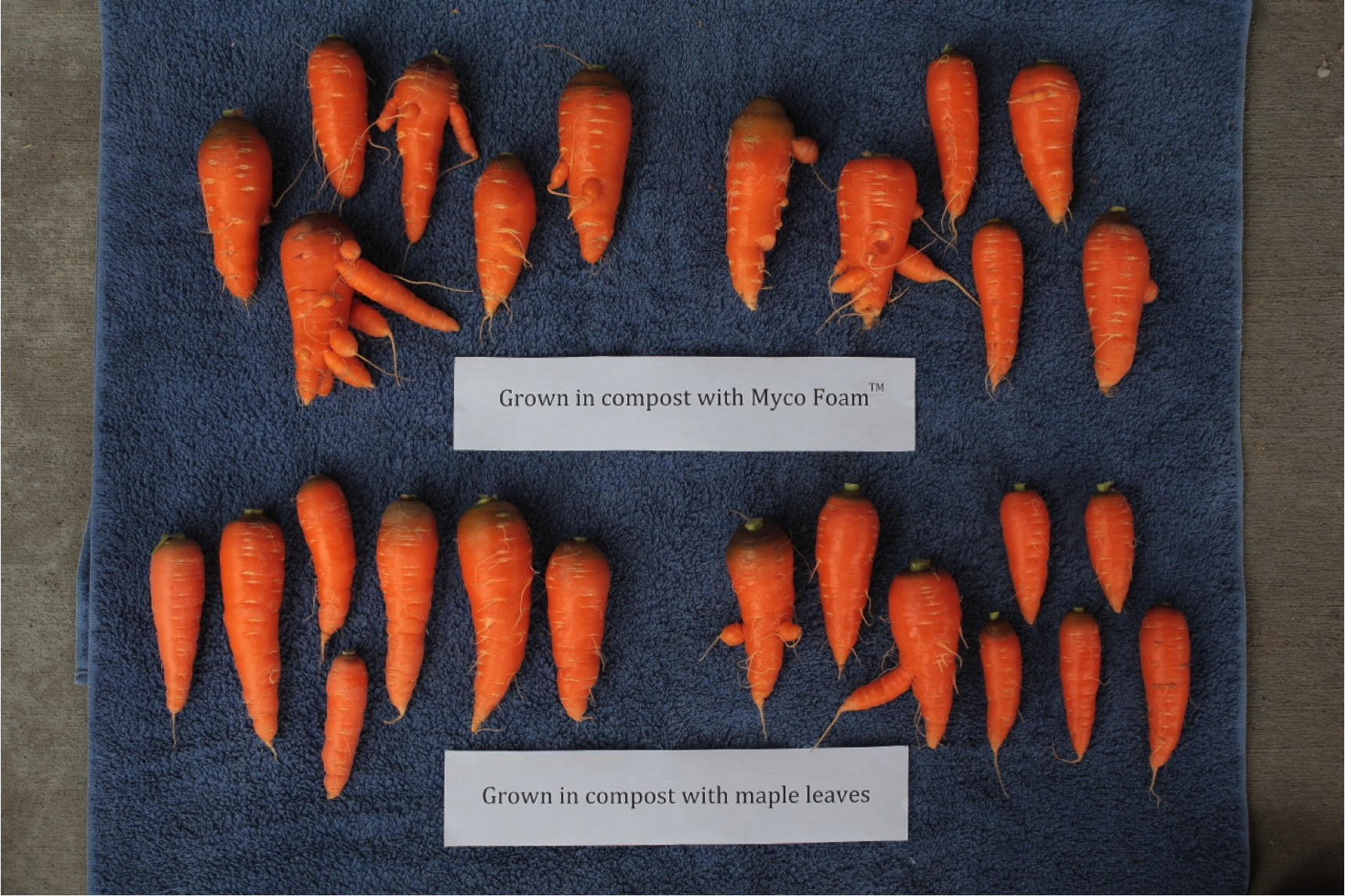 We had carrots from each of the pots analyzed by the Nutrient Analysis Laboratory at Cornell University.  The table below shows the analysis for mineral elements that are needed in the largest quantities in human nutrition, and also shows the amount of these elements typically found in carrots according to the U.S. Department of Agriculture.  There was quite a bit of variation among the pots, and the starred numbers indicate a statistically significant difference between Myco Foam and maple leaf composts.  The Myco Foam carrots were higher in magnesium, but somewhat lower in calcium and iron.

The Myco Foam carrots also had more nitrogen on average, though this was not a statistically significant difference, and both had less nitrogen than the USDA value.  This is not surprising because most carrots are grown with extra nitrogen added to soil in chemical fertilizer or animal manure, neither of which was used in our experiment.

The lower calcium and iron contents of carrots grown in Myco Foam compared to maple leaves was something of a disappointment, but forestry research has shown that leaves of sugar maple (the species used in this experiment) are very unusual in containing large amounts of these elements even after they fall from the trees in autumn.  Therefore, maple leaf compost is unusually rich in these elements, and compost made with other types of plant material might not exceed the Myco Foam calcium and iron levels.  The average calcium and iron contents in carrots grown in both Myco Foam and maple leaf composts were both as high or higher than the typical carrot measured by USDA, as shown in the table, so in this sense all of the carrots were nutritionally adequate.