Q: What first sparked your interest in the realm of mycology?

A: I really like walking through the forest. Here in south Germany I found so many different kind[s] of mushrooms that I began photographing them about three years ago. I became obsessed with them and at one point I started asking myself: “What am I photographing?” This was when I really looked at mushrooms and tried to identify them. Shortly after that, I listened to the Joe Rogan Podcast where Paul Stamets was on and this man really blew my mind. 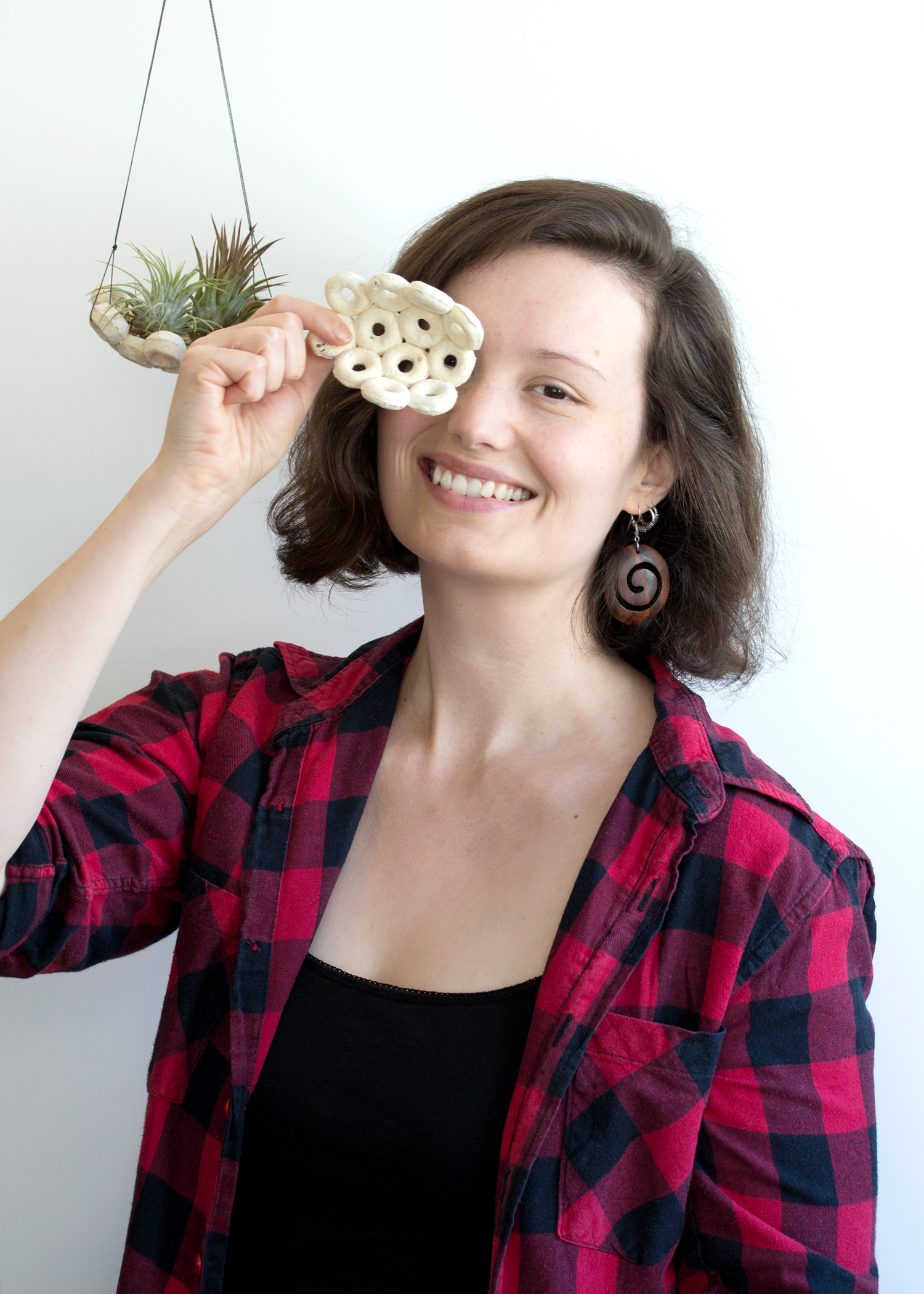 Q: What exactly are you researching/working on?

A: I finished my bachelor thesis recently which is about Fungi. Since I studied product design, I had to come up with a product of some sort in the end. During my research about the historical and modern use of mushrooms I found out that these organisms were really important for human development in general. Nevertheless, most people seem to be skeptical about mushrooms or even fear them. Paul Stamets calls this “mycophobia”. With my project, I wanted to transform this “mycophobia” into a “mycophilia”. I worked on ways to reduce the distance between the user and the fungus, because fungi can be very useful in the form of the mushroom material for example.
To make this material even more appealing than it already is, I tried to change the aesthetic properties a bit. For instance, I wanted a smooth surface. So I put the substrate into a blender. Furthermore I concentrated on shapes and what they could communicate. The three interior objects I came up with are inspired by wild fungi, especially polypores.

To show the pros of a self-assembling material, I used two methods to work with the mycelium: I created a structure that is made from smaller, donut-shaped objects which then grew together. For the shelf, I put wooden hangers directly into the mould so that there is no need for assembling any parts later on. 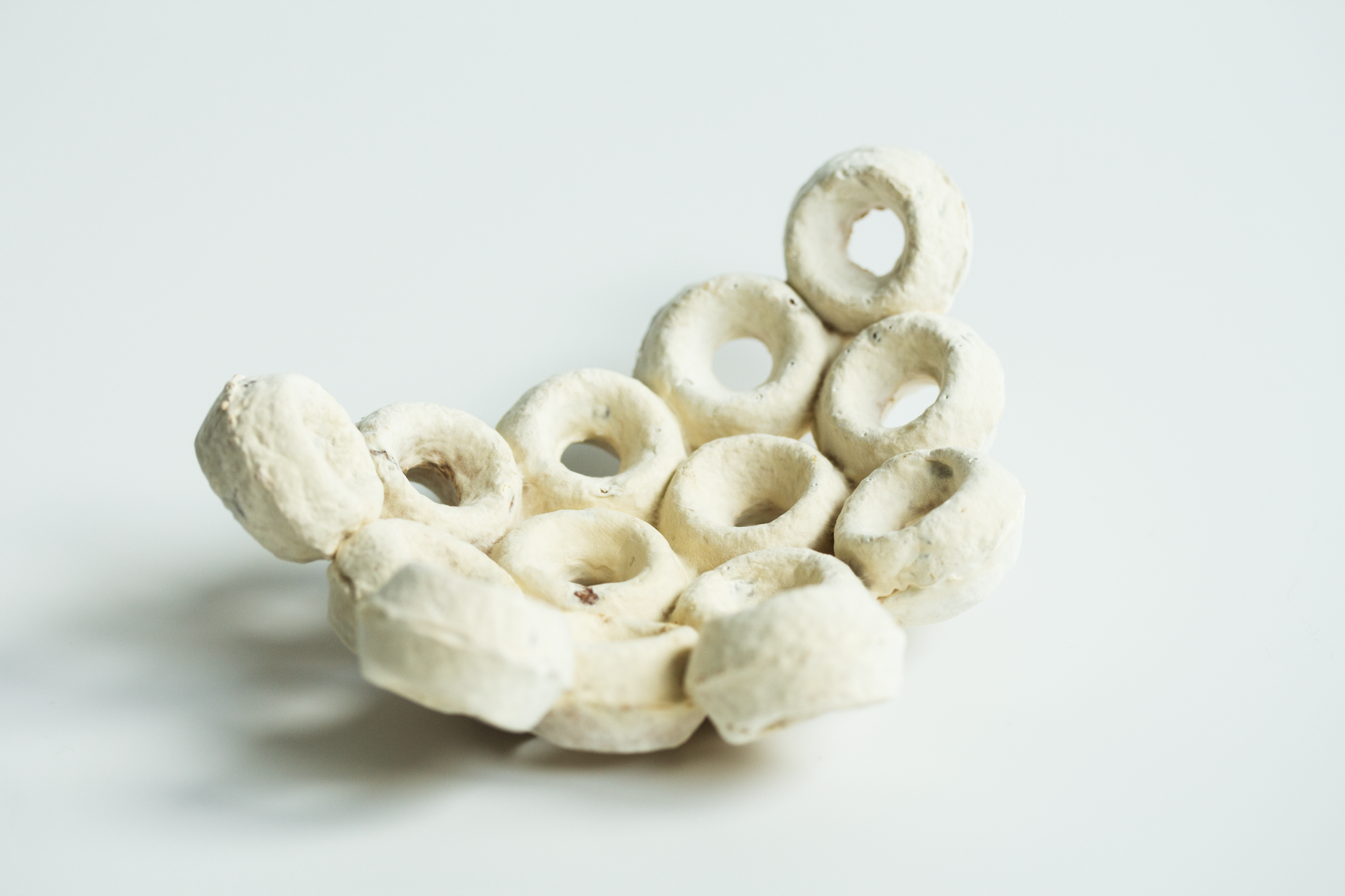 Q: What is the purpose of your research/work?
A: I am interested in sustainability and I love mushrooms. They can do so many things that we can’t do. My goal was to demonstrate that not all mushrooms are bad, disgusting, toxic etc. Mushrooms can be beautiful, appealing and – regarding the sustainability topic – really helpful. I think it is important to change the negative opinions about mushrooms if we want to introduce a material that has so many benefits. 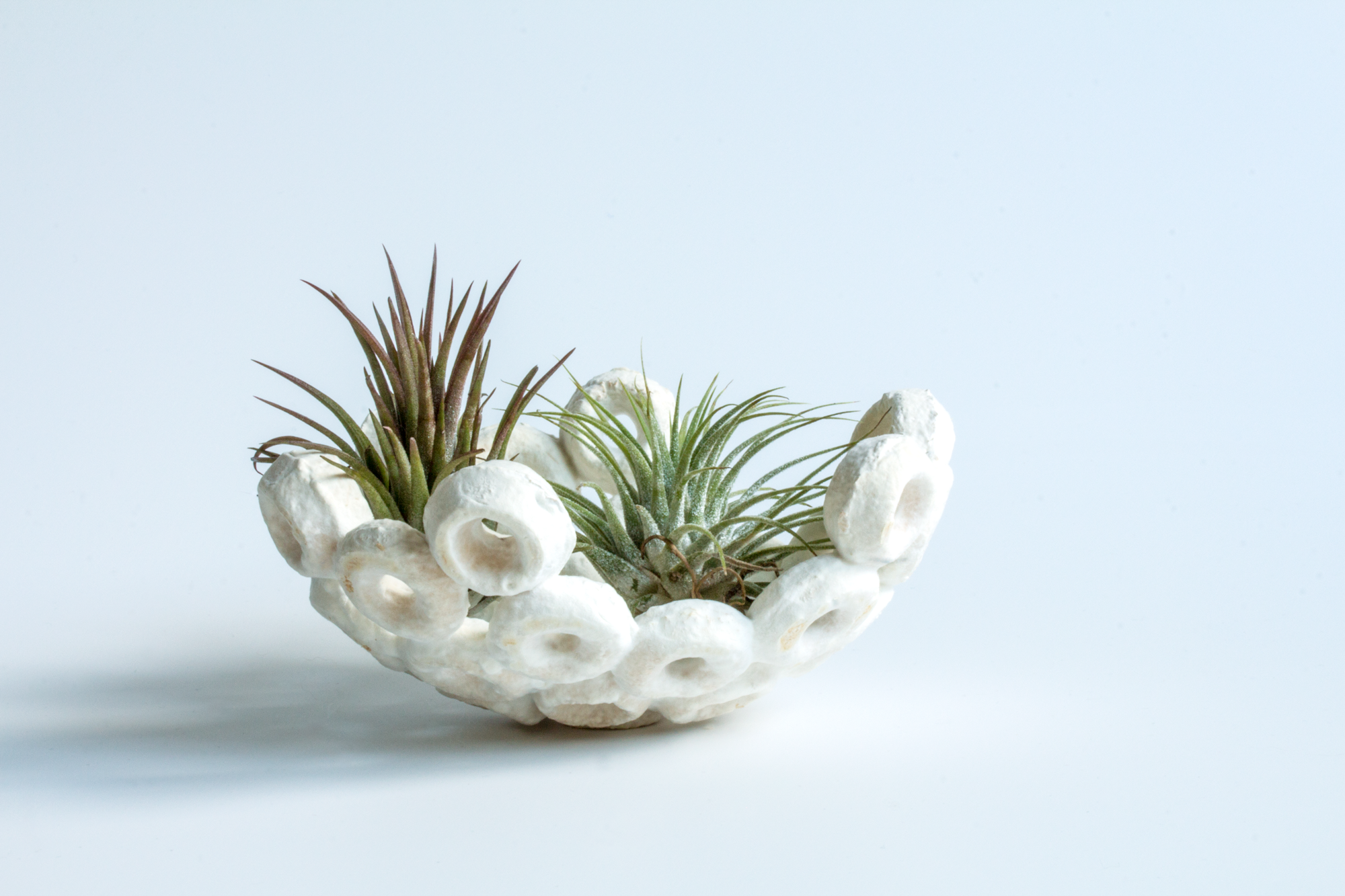 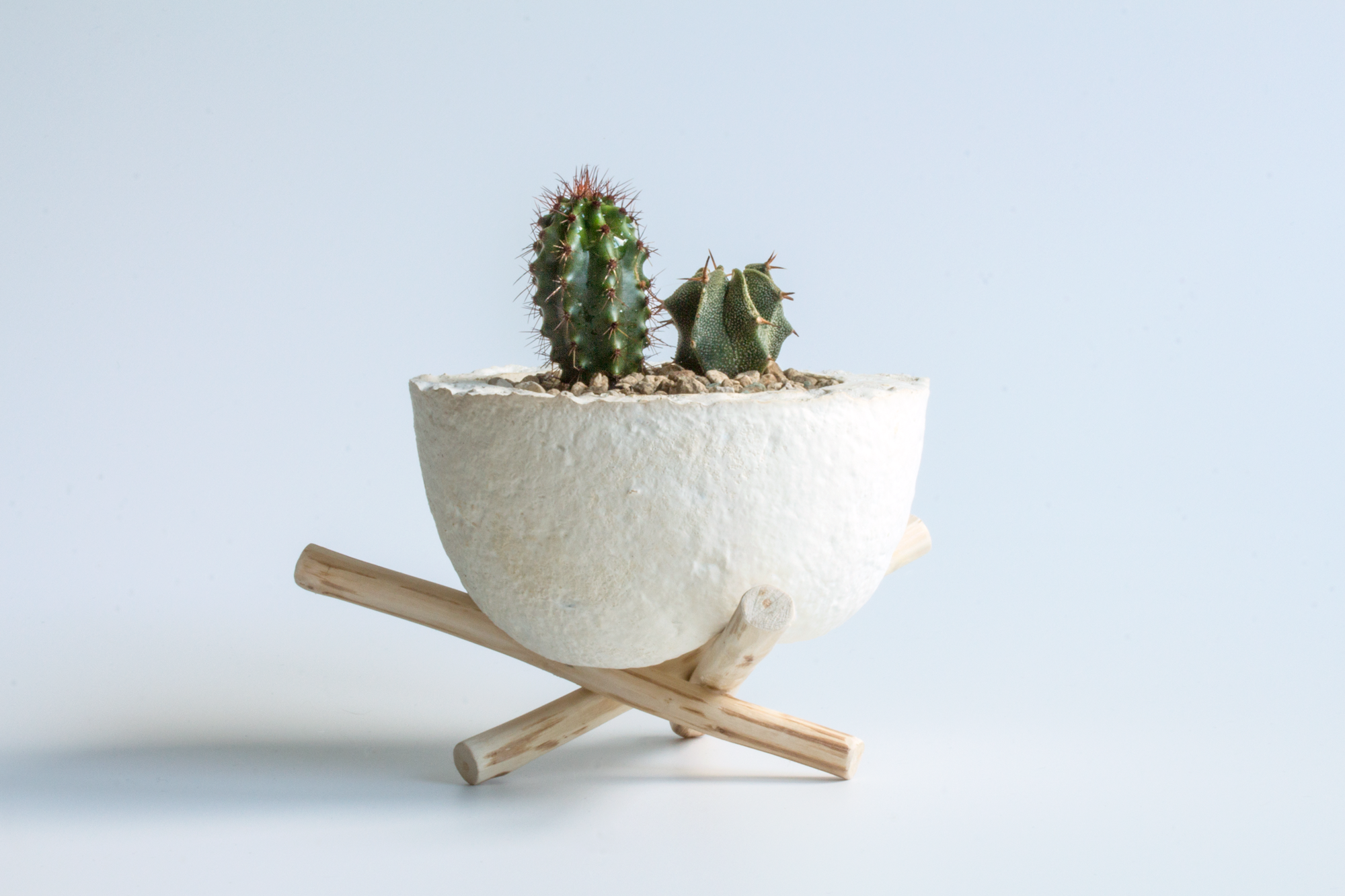 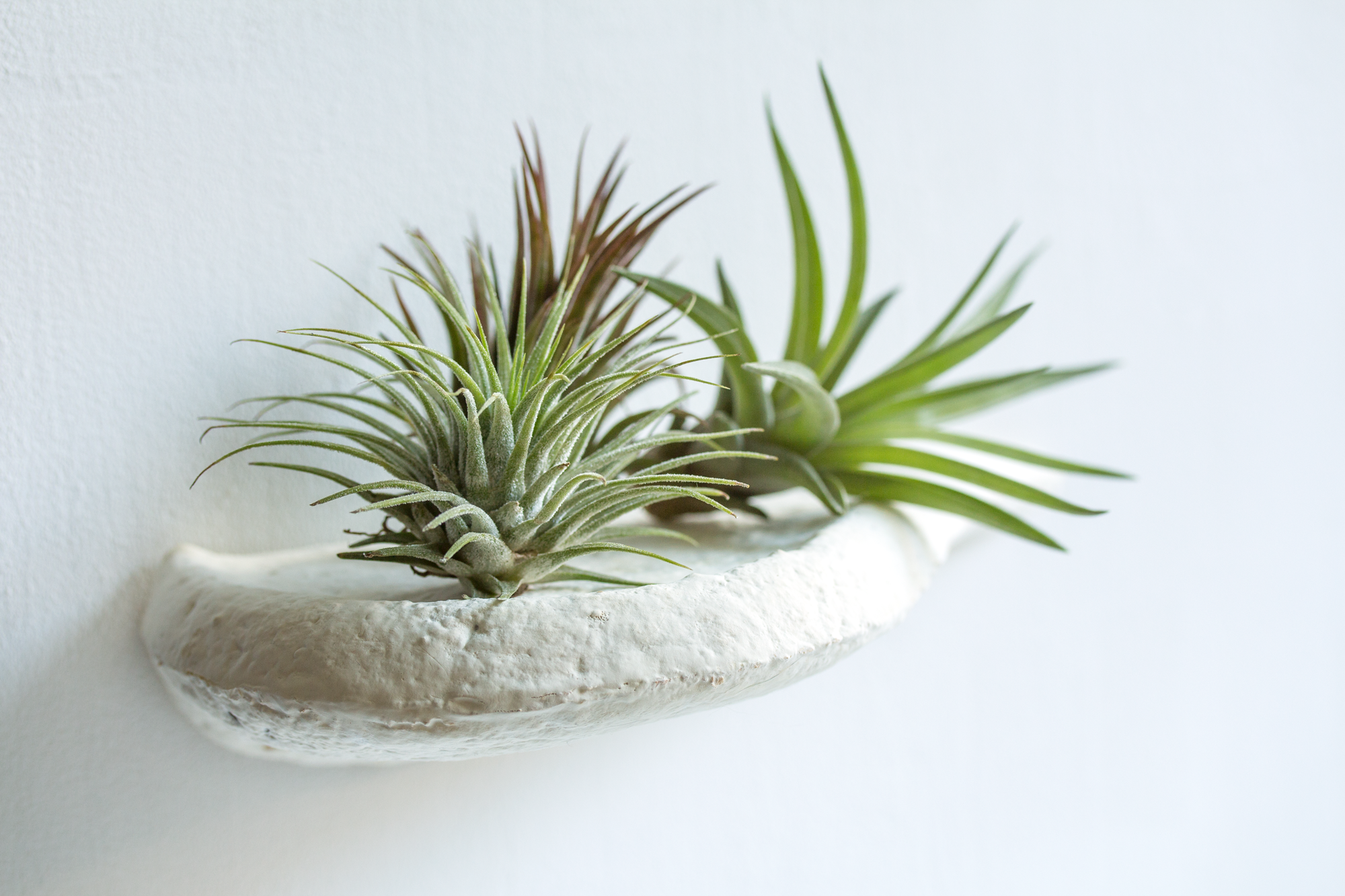 Q: What do you like most about working with mushrooms/mycelium?

A: When I work with mycelium I feel a little bit like when I had my tamagotchi as a child. I like that you have to take care of this organism and understand it at least a little bit. What does it eat? Which temperature does it like? How much oxygen and water does it need? It is kind of like a teacher that will teach you to be attentive, mindful and disciplined. If you accept this organism, its needs and avoid working sloppy, you will be rewarded with a beautiful, clean mycelium growth.