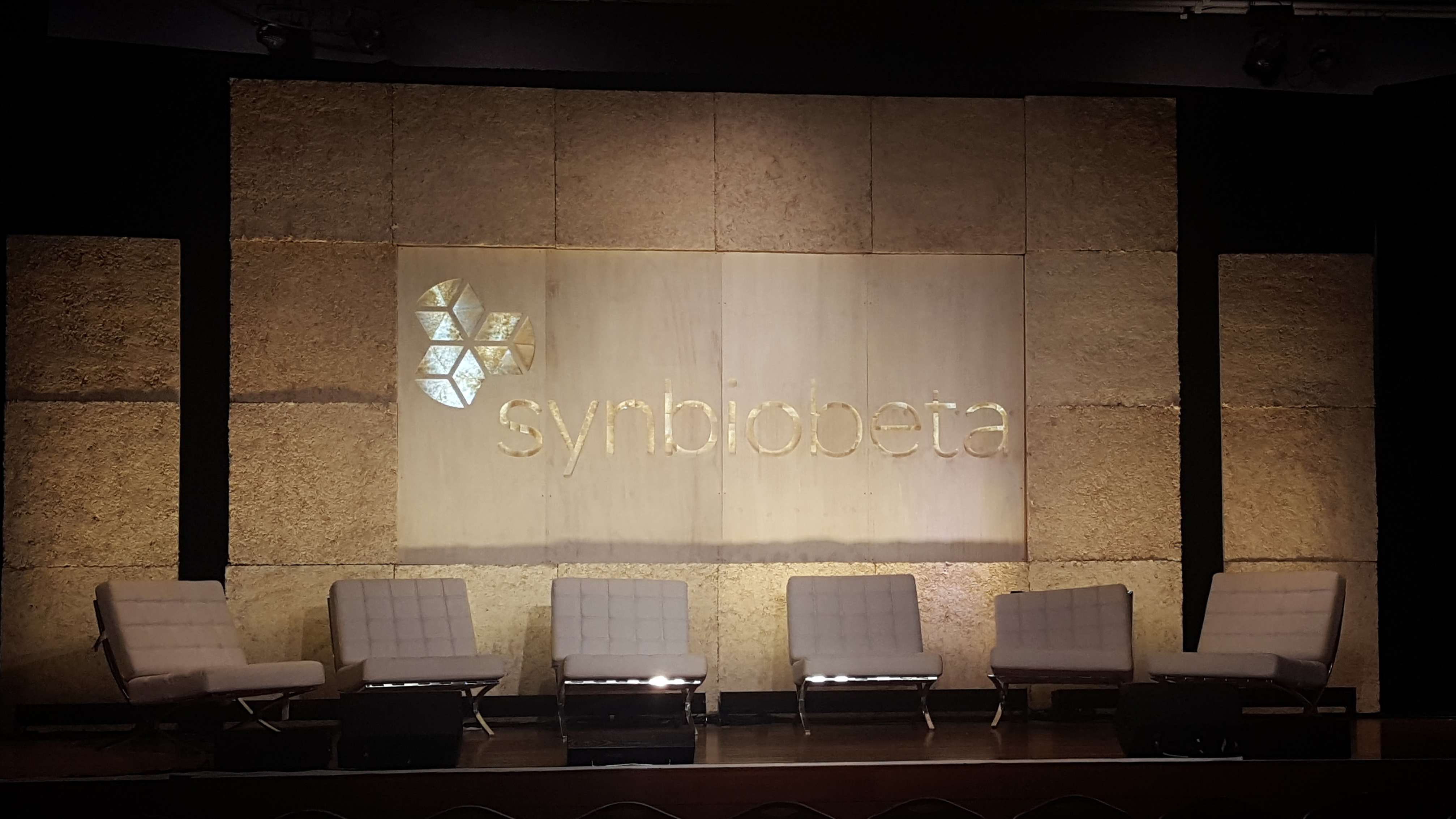 We are now entering the Biofabrication age, post-Industrial Revolution. The future of materials will be grown. With mycelium (mushroom roots) specifically, we aren’t limited to size constraints, which lends itself well to micro and macro applications. The Mushroom Stage for Synbiobeta 2018 was a project of firsts. It was the largest set design to be built with MycoComposite panels, and the first to incorporate Ecovative’s MycoFlex biopolymer.  To grow MycoComposite panels, mycelium binds together aspen wood shavings in a large aerated bin, and the grown block is cut into 2 inch panels. MycoFlex biopolymer is pure mycelium, grown above rather than throughout the substrate, and can be sliced very thin to produce an opaque textured glow. 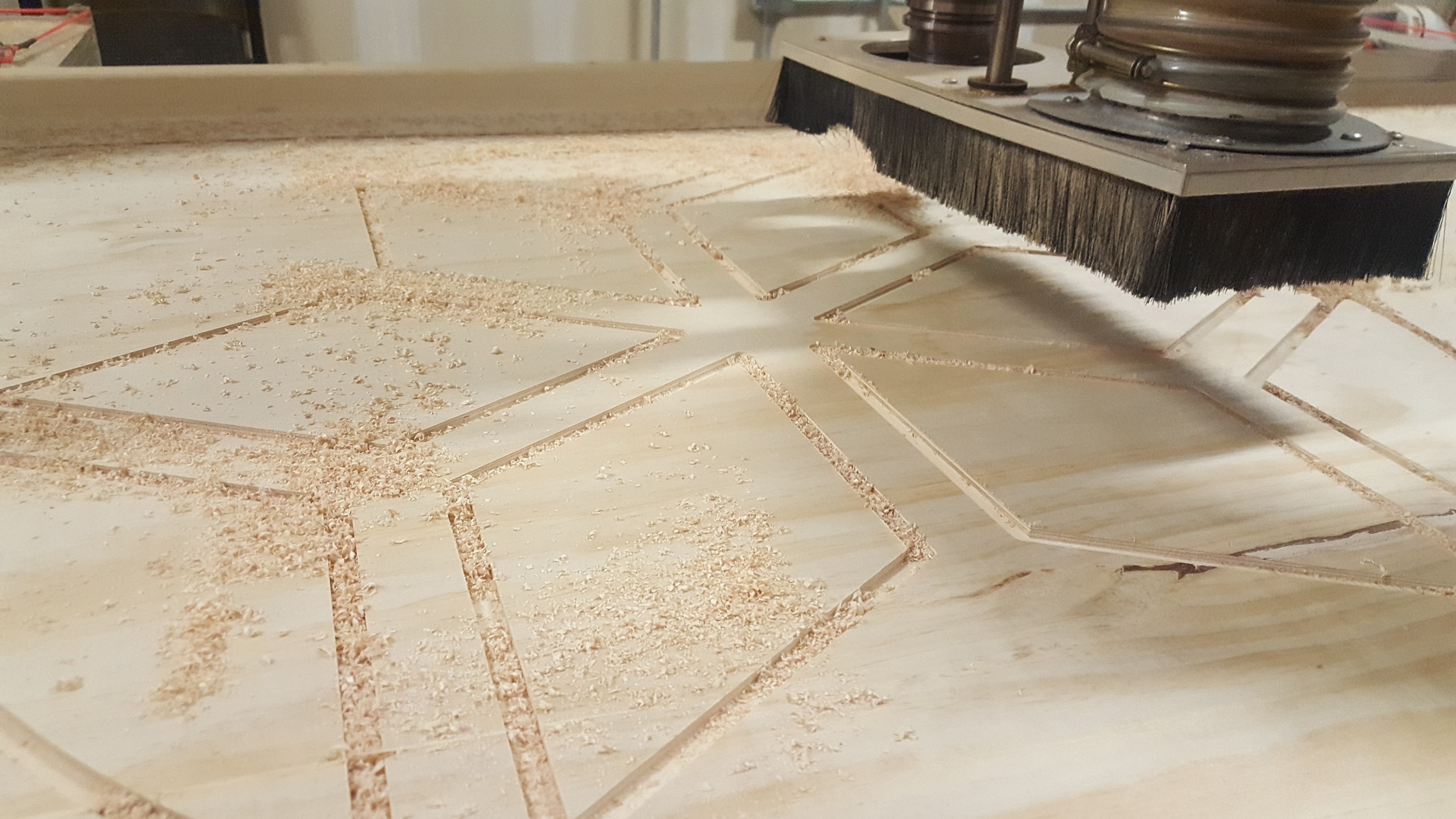 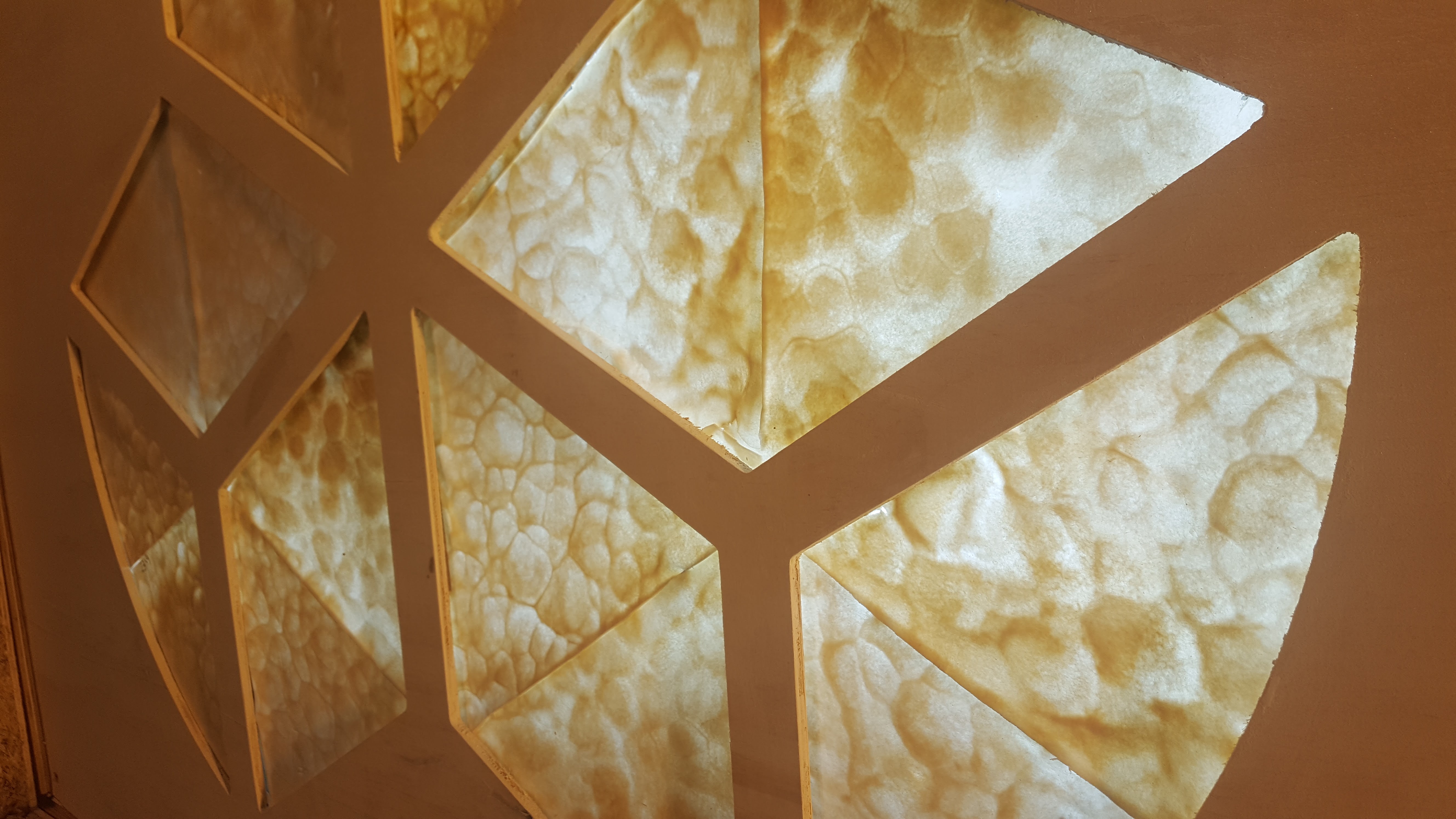 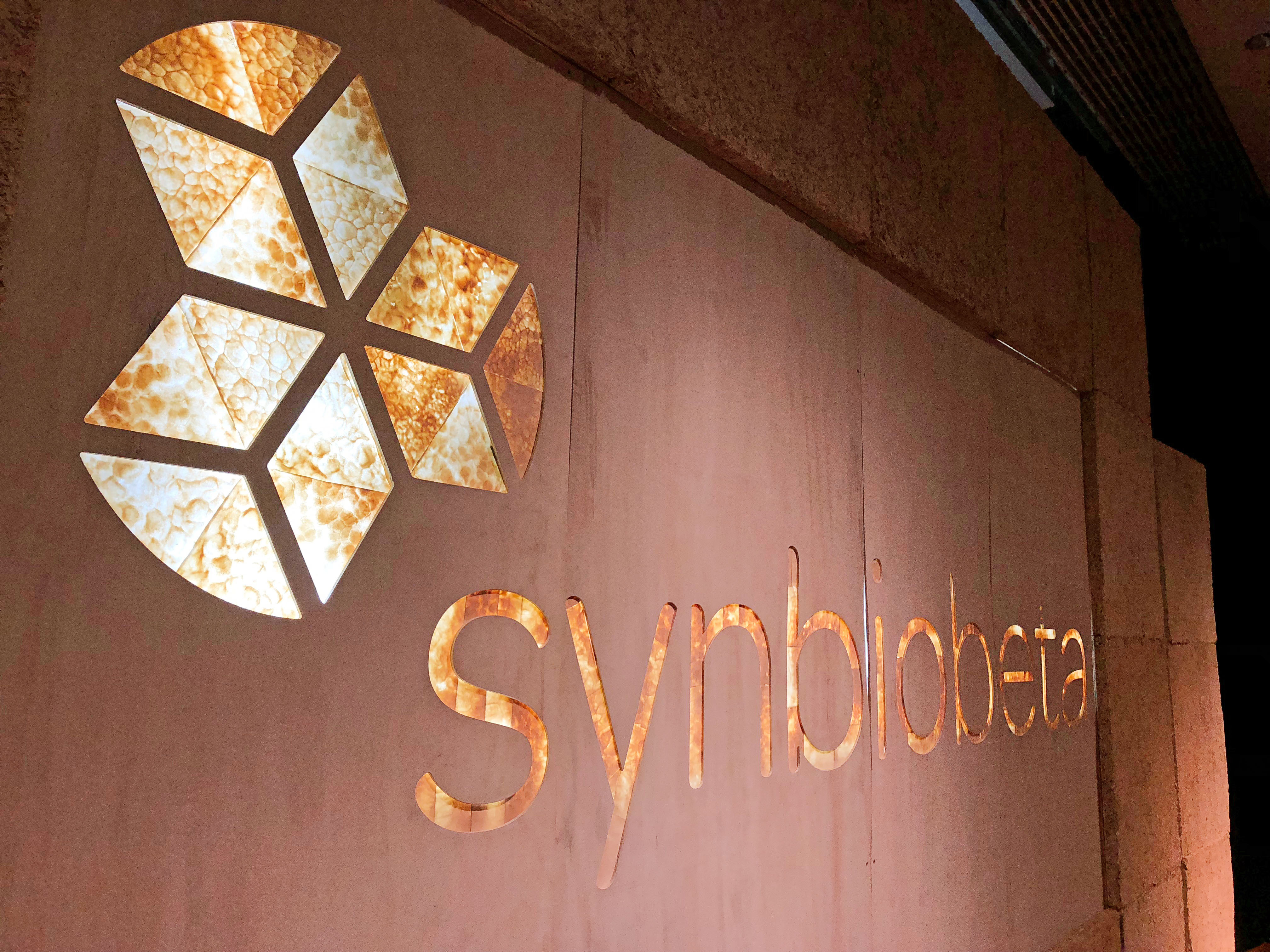 The set design began when Danielle held a thin slice of biopolymer up to the ceiling lights. The designers knew they wanted to showcase the beautiful vascular structure of mycelium, as well as make the velvety texture accessible for panelists and conference attendees to touch. The team’s design objectives were two-fold: surprise the audience that the set before them was made from mycelium initially unbeknownst to them, as well as empower individuals to make their own projects with biomaterials. 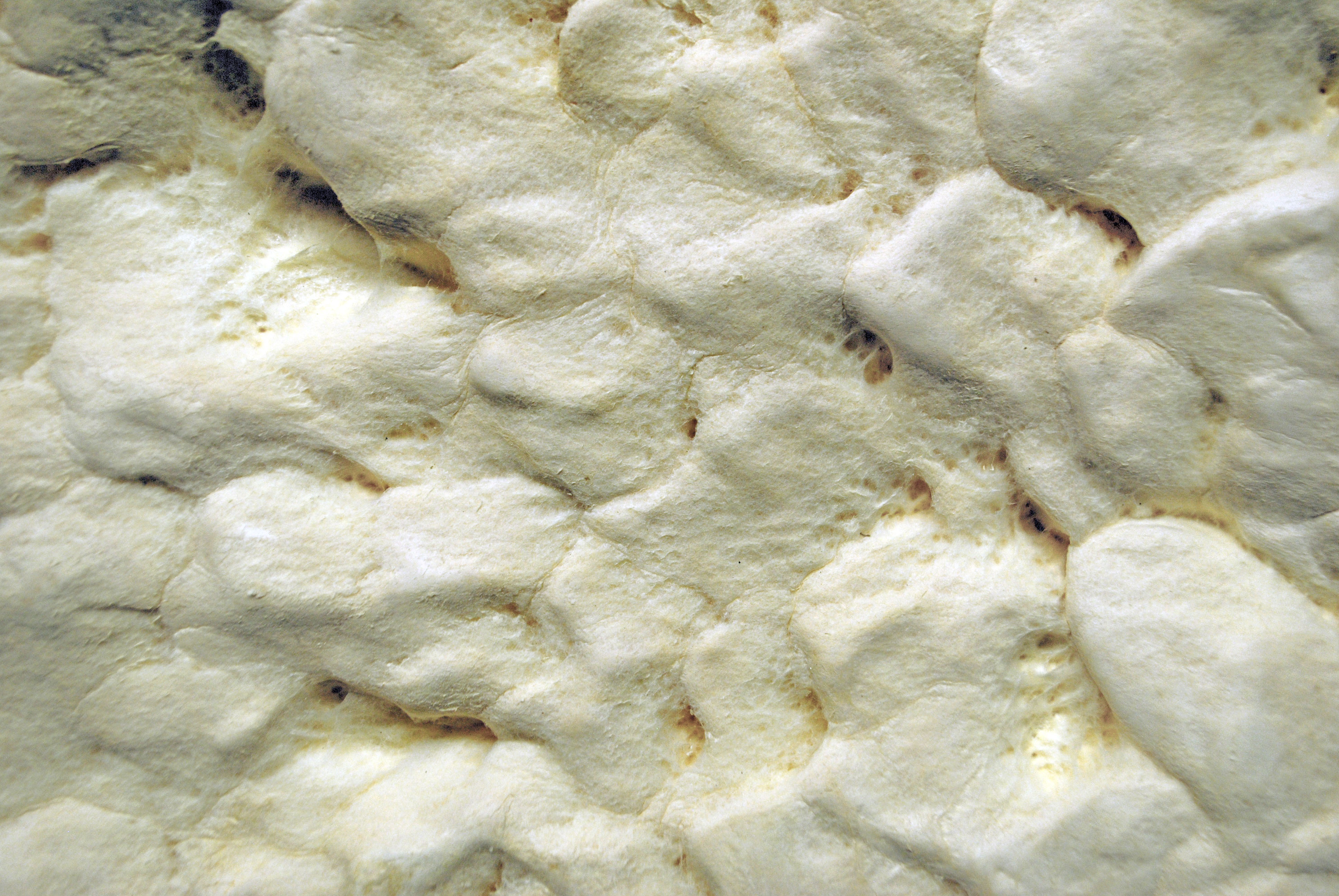 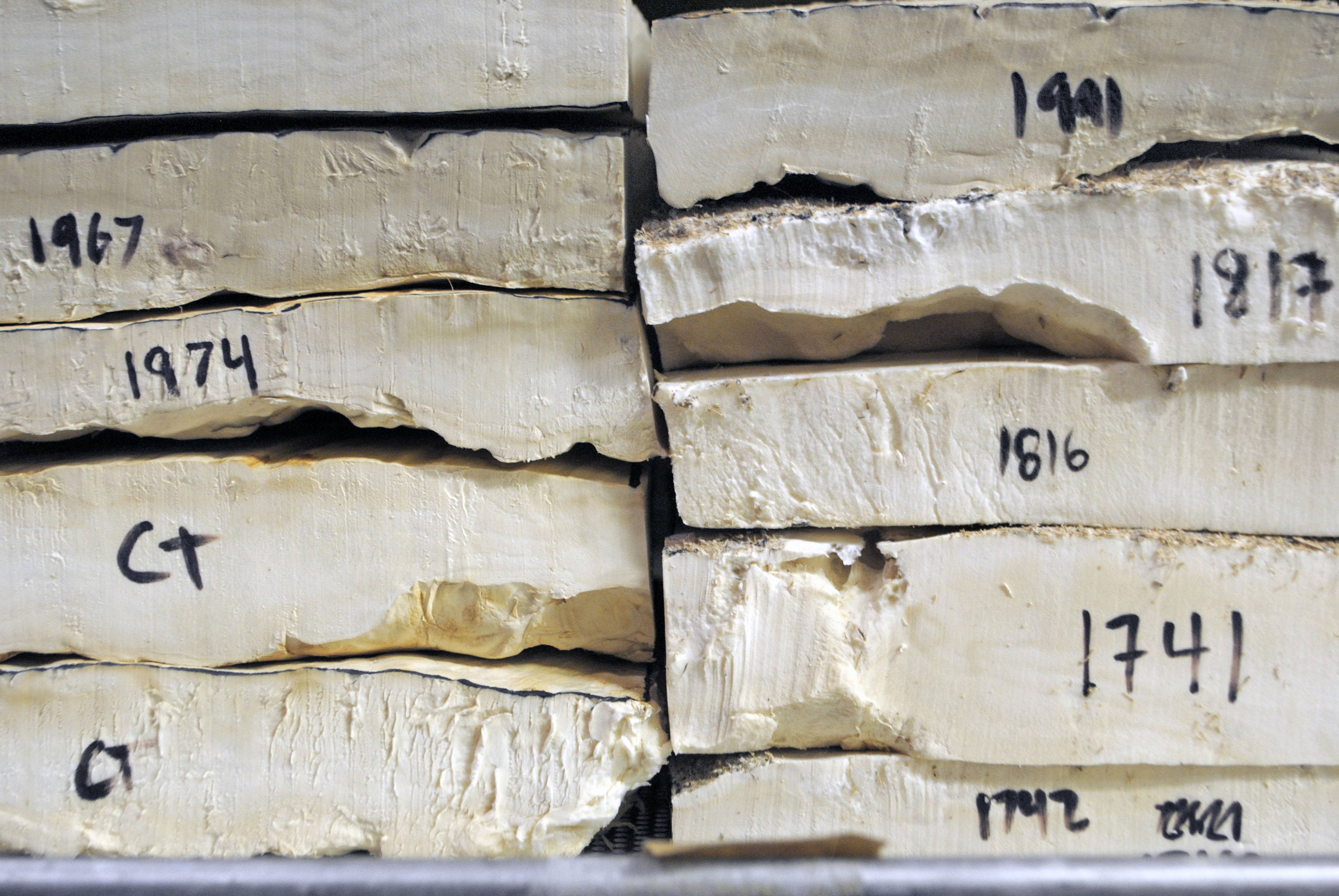 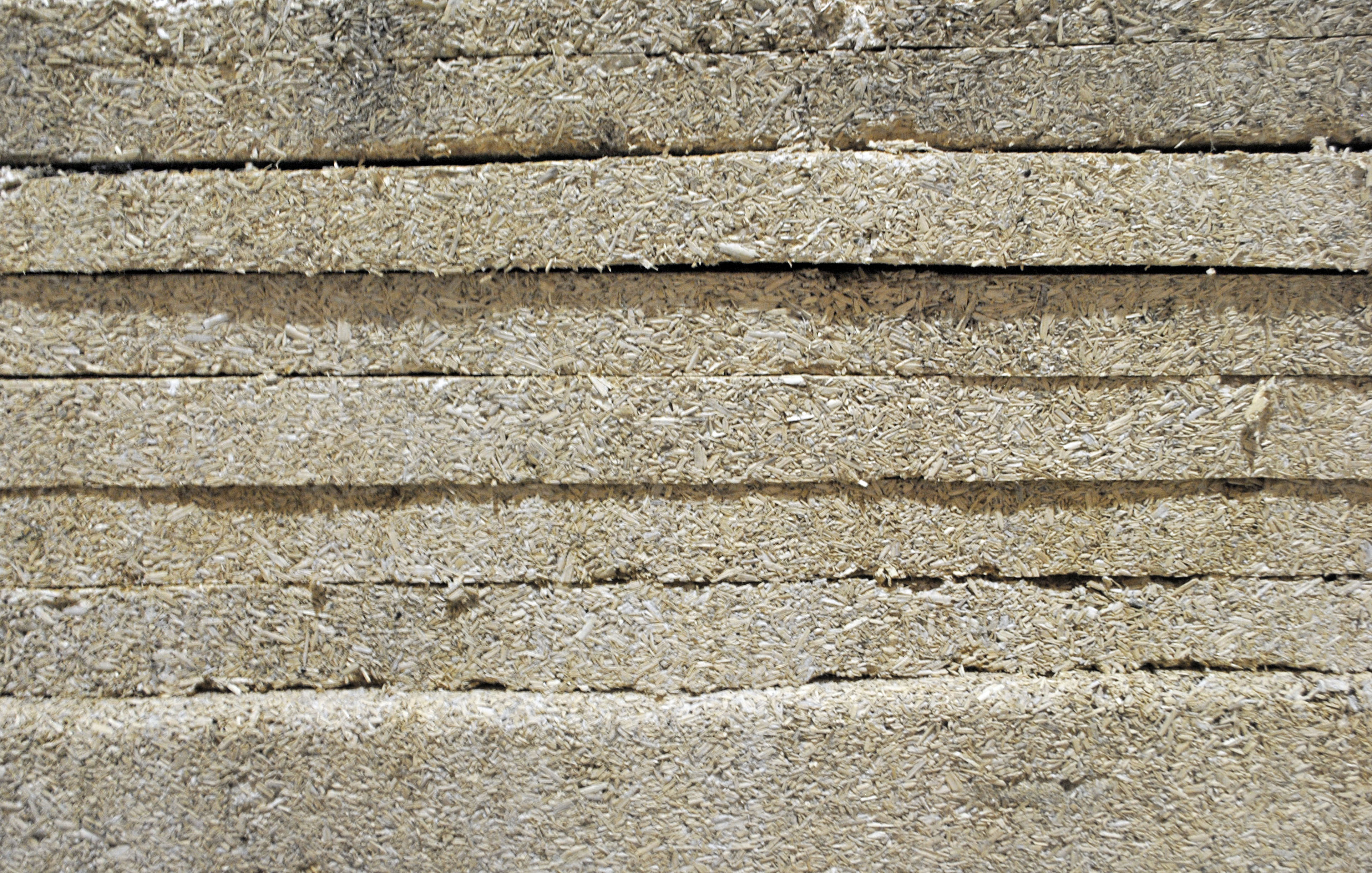 The designers, Grace Knight and Danielle Marino, both have Industrial Design degrees and complemented each others skill sets. Grace’s woodworking knowledge of veneer and bent lamination provided the technique for adhering the MycoComposite panels to wood. Danielle’s knowledge in creating custom molded shapes on the CNC router allowed them to create a precise logo. Grace had also previously worked for a lighting designer where she learned how to solder LEDs, and wanted to use this knowledge for backlighting the biopolymer. The construction couldn’t have been possible without coordinating with Ray and his crew who prefabricated the structure in segments and assembled it on site.  Despite the long hours of planning that went into the design, there will always be unforeseen challenges. The team had to think on their feet to reconfigure the modular design accounting for the depth of the stage. Within a few hours the set stood completed, the Mycoflex biopolymer was shining, and thus began Synbiobeta 2018 Day 1. 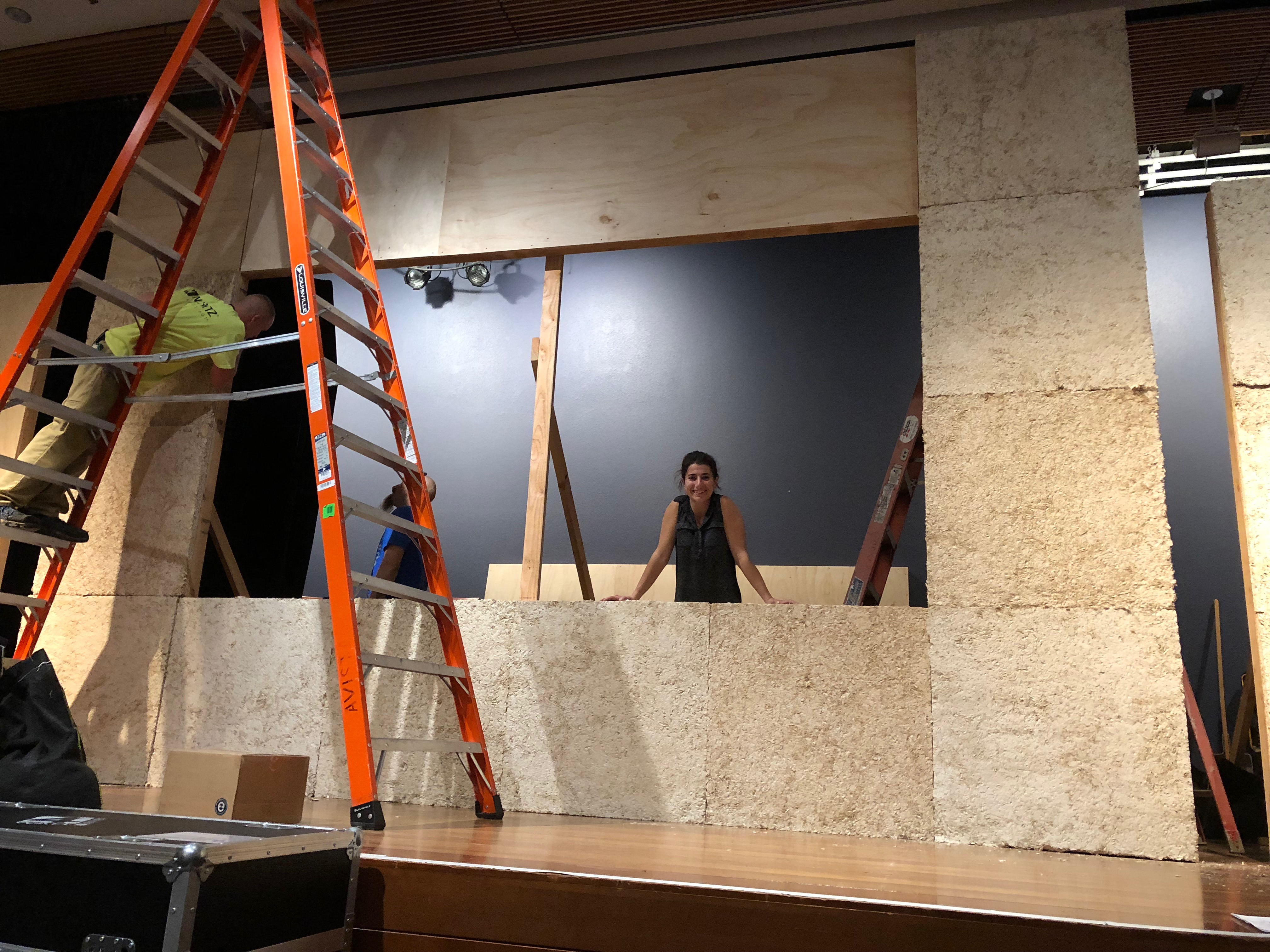 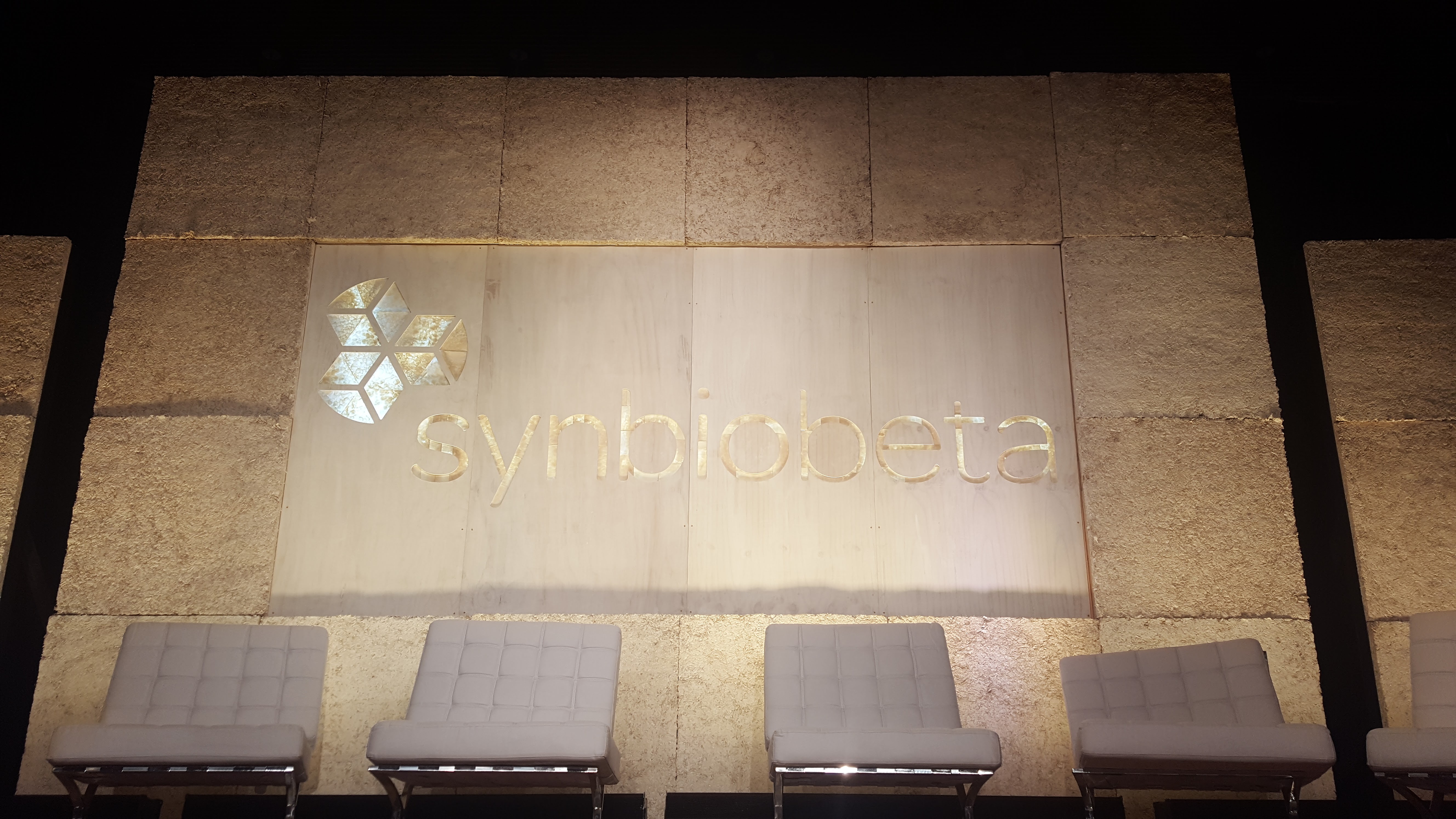 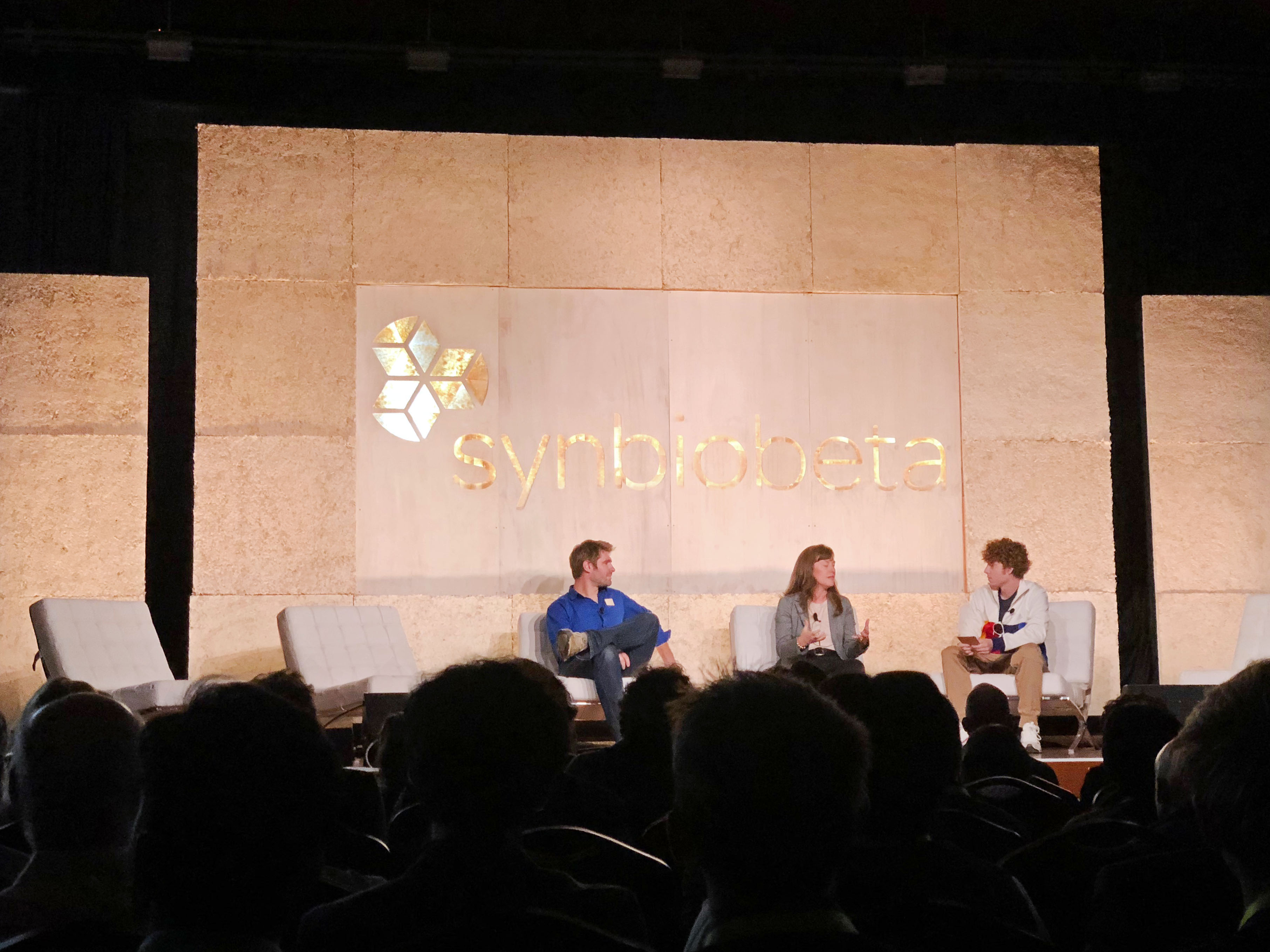 The stage was impressionable, substantial, and well received by all. This project is only one example of what can be done with biomaterials. If you have any interest in growing your own mycelium creation, a good way to start is with one of Ecovative’s GIY bags. Contact us if you’re interested in using MycoComposite panels and MycoFlex in your design work. Happy Mycofabricating (yes, we often make up words here)! 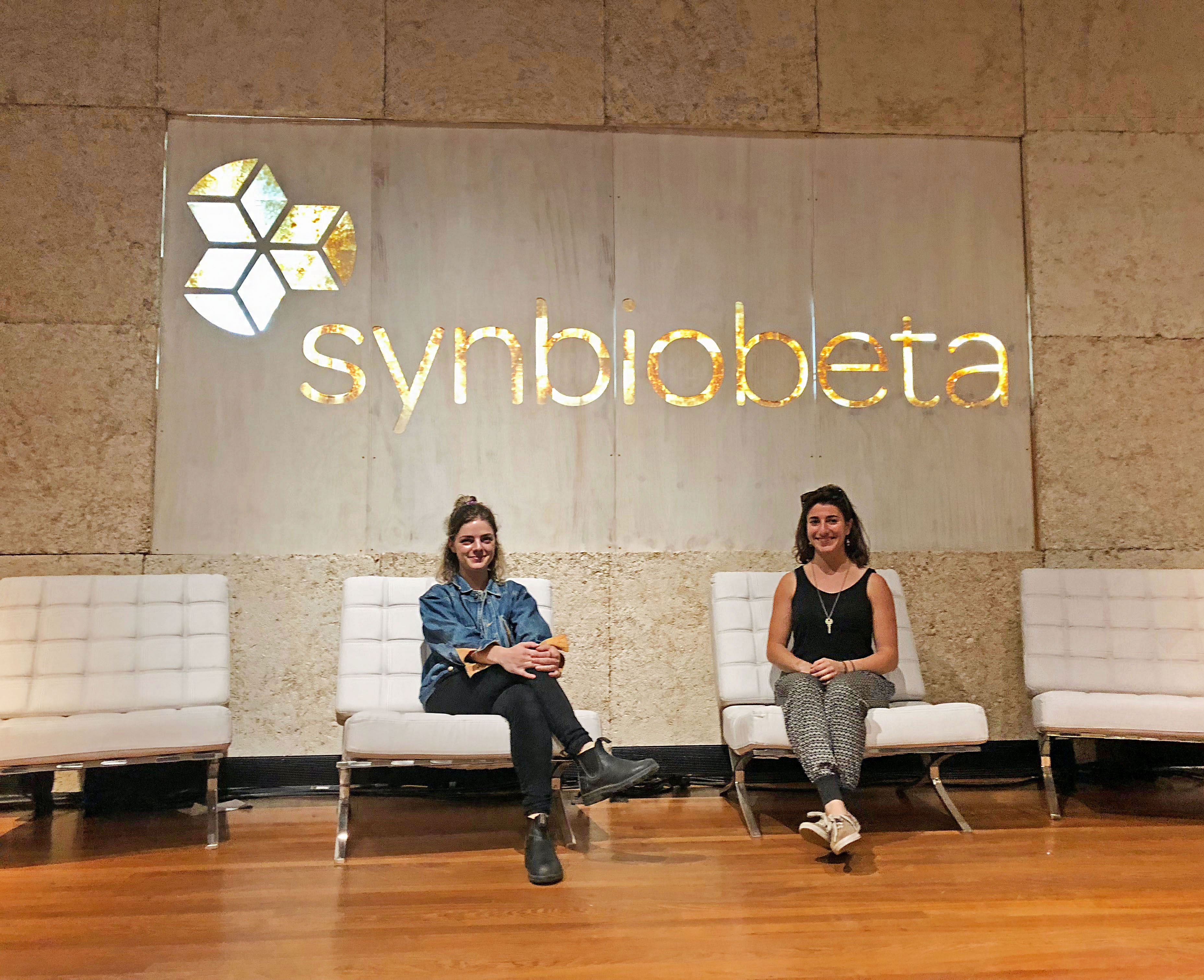 MycoComposite 584 is comprised of 95% Aspen Shavings and 5% Mycelium- the roots of mushrooms.

MycoFlex is 100% mycelium and can be grown to produce a high or low density biofoam.

Ecovative was founded in 2011 and has dedicated over 10 years to growing mycelium composites.

For the last 5 years, intensive research was conducted to produce pure mycelium. On Oct. 2nd, 2018 Eben launched our MycoFlex platform on the stage at Synbiobeta.

For the panels, we begin growth in the form of a 38’x38x’28’ block using our Bulk Bin Reactor system. These blocks are then cut into 2” thick panels and dehydrated. There are no adhesives, rather the mycelium fills in the gaps between the substrate, and binds them together. MycoComposite is available in 3 different substrates, Hemp, Aspen Chip, and Aspen Shaving, each excelling in their own applications.

The foam is first grown in trays within large scale incubators where we manipulate the environmental conditions to alter the growth of the mycelium. The mycelium grows vertically up off the substrate rather than throughout like the panels. We shave off the mycelium and trim down to form even sheets of MycoFlex. When the sheets are thin enough and backlit, you’re able to see the mycelium structure within, a common vascular pattern found in nature.

We are now entering in the Biofabrication age, post-Industrial Revolution. The future of materials will be grown. With mycelium specifically, we aren’t limited to size constraints, lending itself well to micro and macro applications. In addition, utilizing room-temperature cellular self-assembly to create a material with a known end-cycle procedure is environmentally mindful.