In February, we had announced that we were opening a second manufacturing plant in our neighboring town of Troy, NY. This facility was an exciting project for us because it was going to take our packaging production line that was located in Iowa and bring it right into our backyard. Well, we are excited to announce that the 20,000 square foot facility is up and running, and the team has produced over 68,000 Mushroom® parts there since June!

Since the announcement was made, our engineers had a busy Spring spending most of their days over at the new facility. They were tasked with bringing their custom designed and fabricated equipment online in the new facility, and determining how to best make use of the new space. All of their hard work certainly paid off in the end- this facility is 6x faster than our pilot plant!

Beyond the scale of the equipment at this facility, what contributes to its speed is that this manufacturing line is a continuous flow system- bags of grown material go in one end, and filled trays come out on the other. At the end of our production line is an autofiller that blows our grown material into molds. The autofiller at the new plant has 3 arms on a turntable that enables us to easily fill 6 molds in one motion. We also have a machine that continuously pops the finished parts out of the molds once they’re done growing. This part popper reminds me of a machine you would likely find in a candy factory, not a packaging factory! 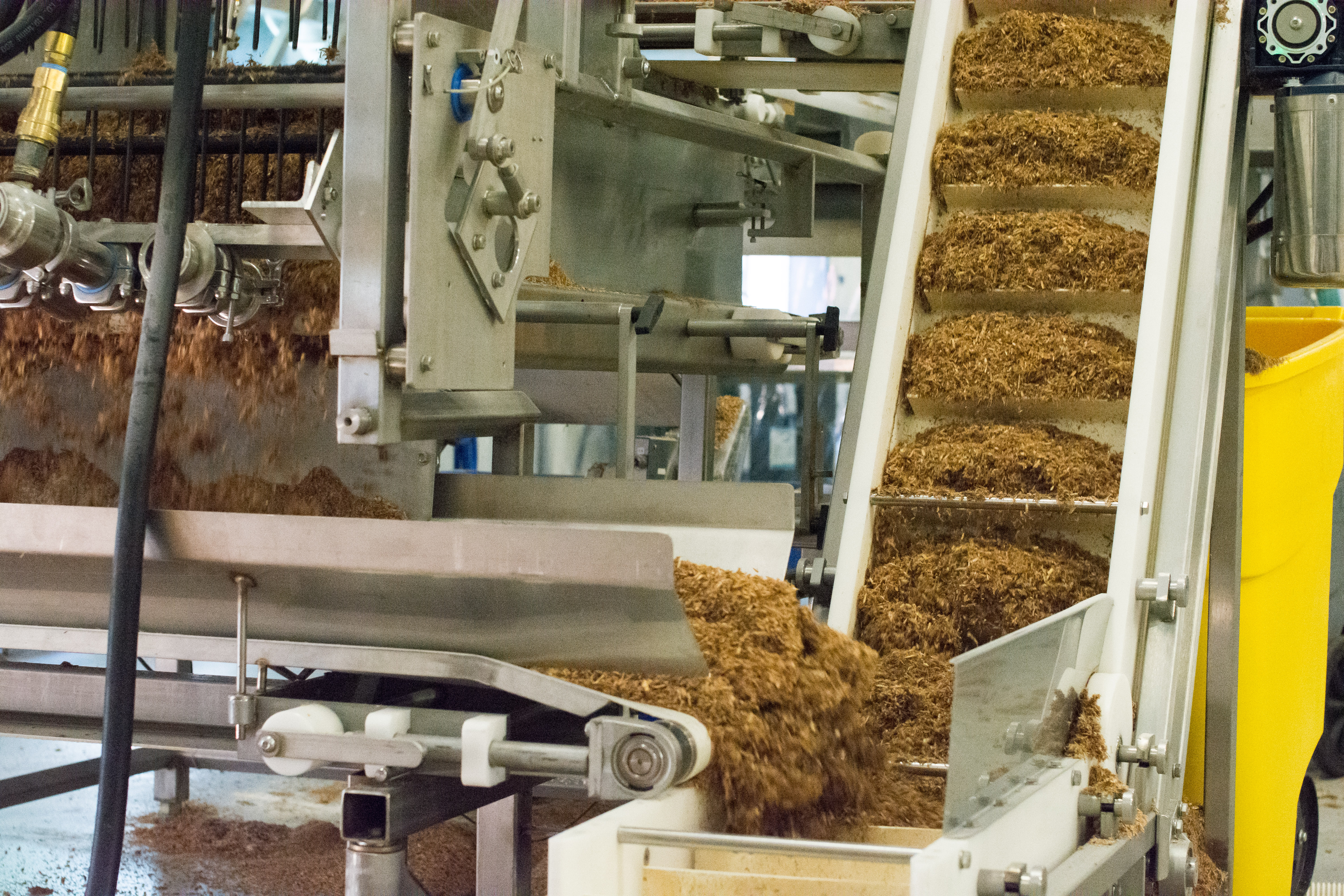 We started production at this facility in June with 10 Ecovative employees on site. Since then, we’ve consistently kept around that many employees over there everyday running the line. We call this facility “Eco East” because it’s located due East of our headquarters- pretty much exactly on the other side of the Hudson River! By the time that you get up to a bridge and over to the new facility, it’s about a 10 minute drive.

One of the first major production runs at Eco East was for In/Flux- an outdoor, temporary art installation for an event that takes place in Calgary called Beakerhead. In/FLUX, designed by Vlad Amiot and Spencer Cutten, was a wall whose shape could be altered by event attendees during mid August. We produced around 6,000 velvety soft blocks at Eco East for this wall, which were all held together by lattice fencing! 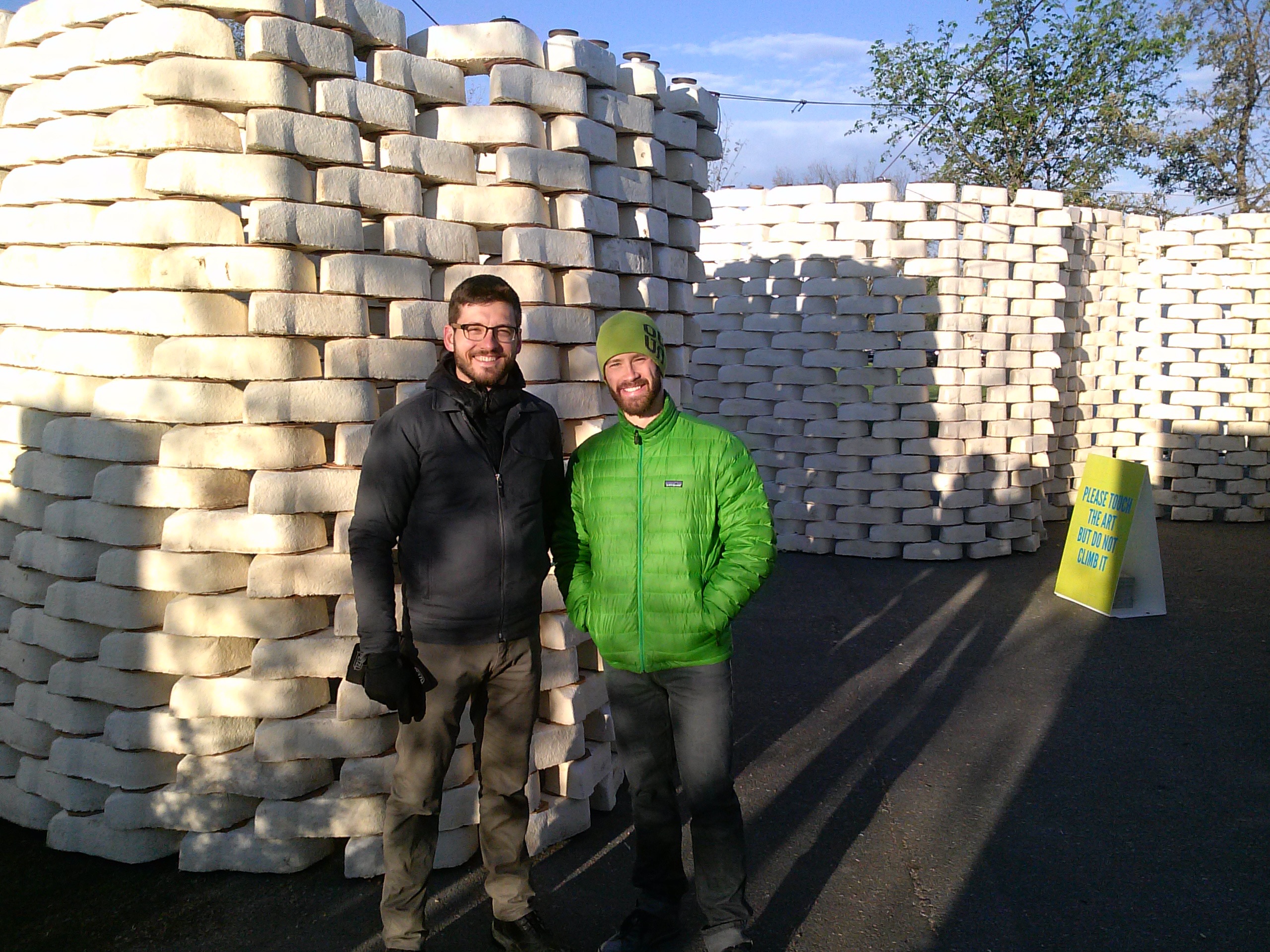 The leftover blocks that were produced made a spectacular booth display at the 2015 World MakerFaire in New York City- the geometric shapes and smooth surface were a big crowd pleaser and instantly drew people to our booth to learn about GIY. 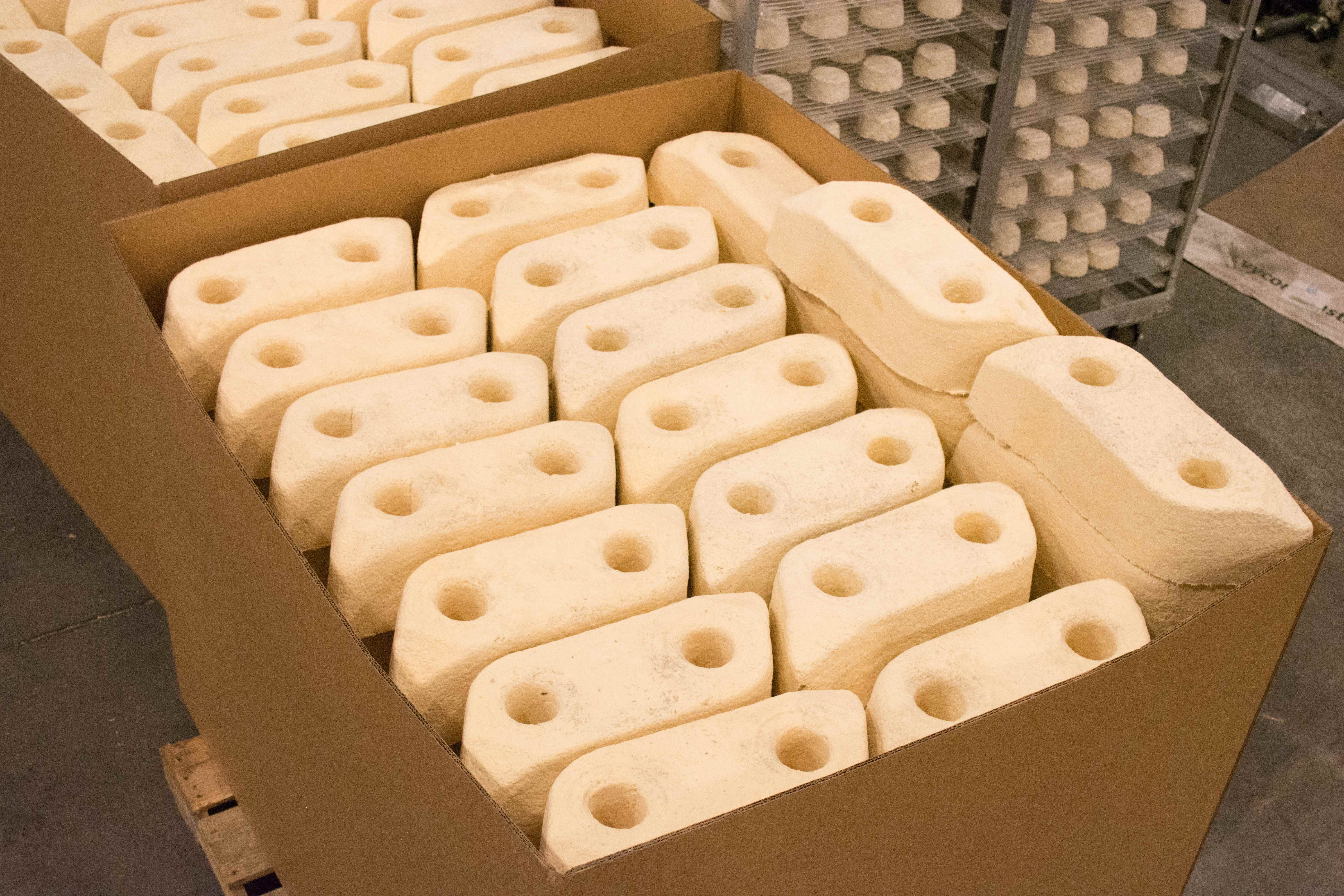 The new facility allowed us to fill the In/FLUX order in record time. Since that first successful run, we’ve fulfilled many packaging orders over at Eco East, including a new order from our well-known customer, Dell. 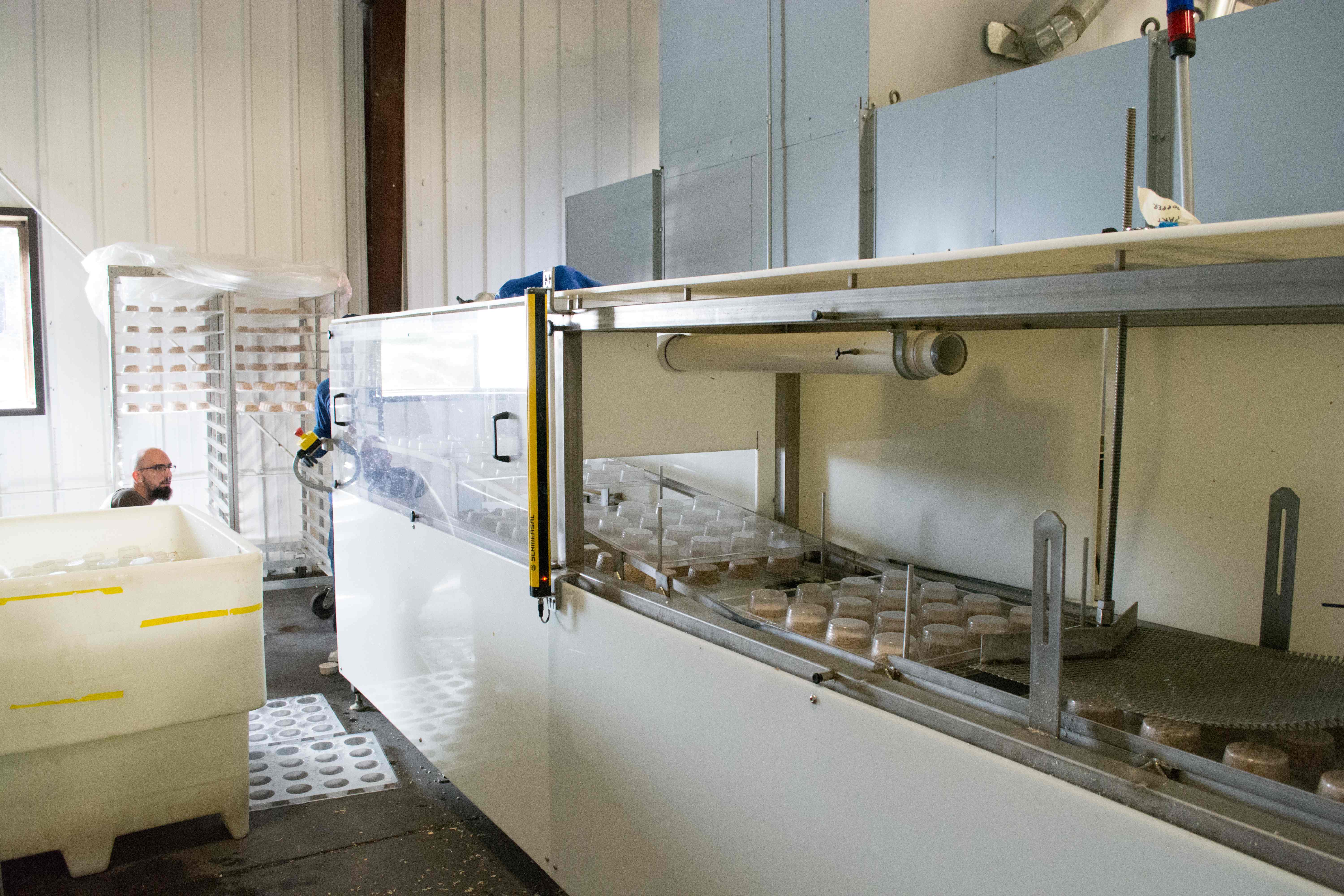 Once production was up and running smoothly at the facility, we found we had some extra floor space to use and decided to install a large press for our Myco Board product line. This press stands 16 feet tall and weighs over 70 tons! This piece of equipment is so heavy that we needed to fill a new concrete slab on the floor to support the weight of it. 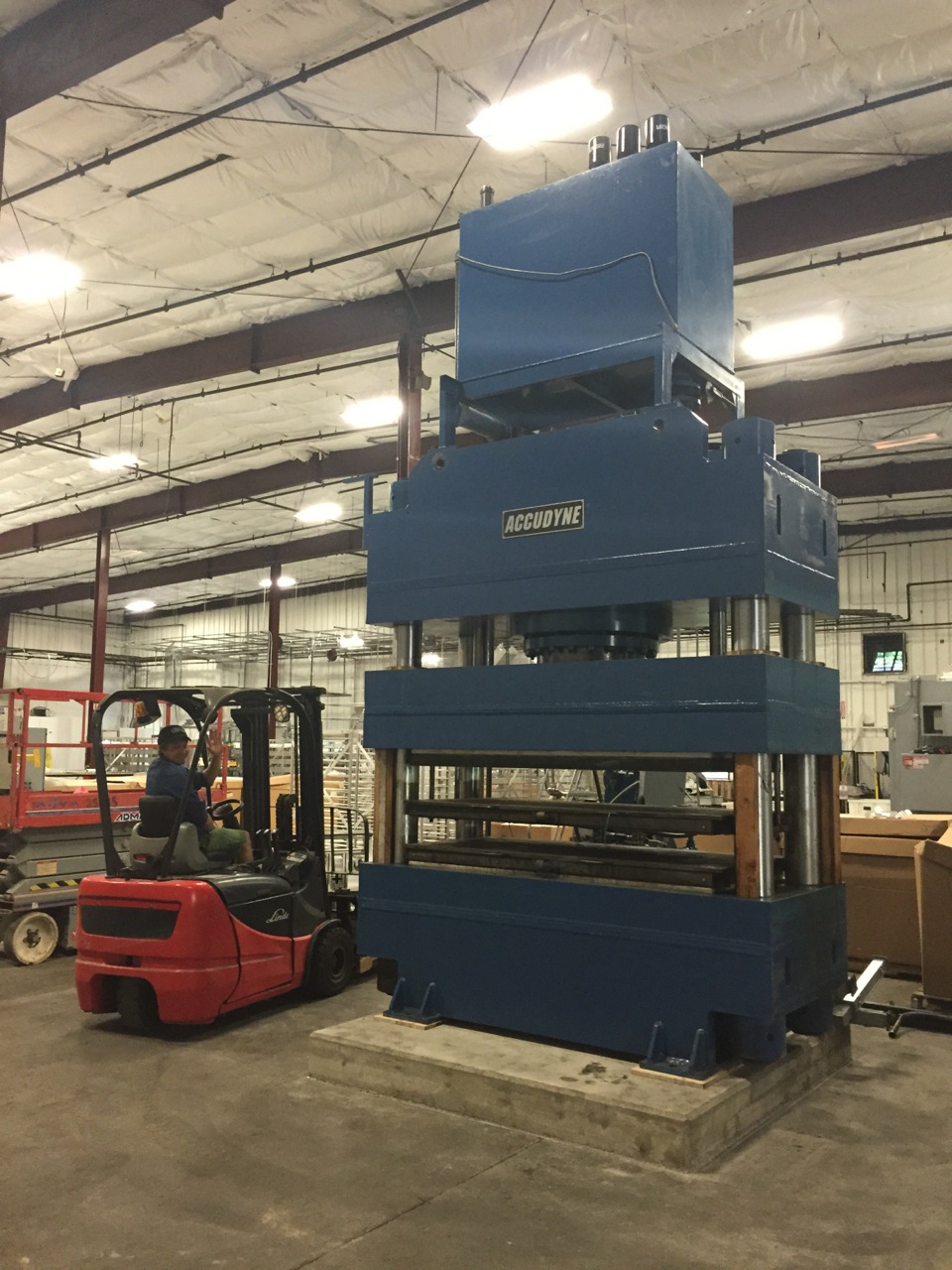 The new press has two openings, both measuring 3x6’. This means that we’ll be able to produce larger and stronger Myco Board panels for our customers going forward.

This new facility is a huge accomplishment for our growing company. It’s not only supporting our packaging product line, but it’s also supporting our growing Myco Board business for the furniture industry. With these new capabilities, we’re also beginning to explore production of Myco Board panels for the green building industry and fire rated door cores.